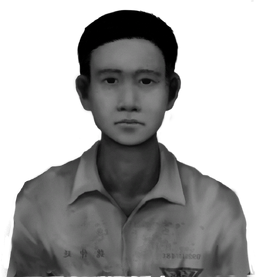 Wei Chung Ting, referred to as Wei, is one of the main characters in Detention. Wei is the playable character during the prologue, but is not used again except for during the true ending.

Wei is one of a handful of students in the school's book club, hosted by Ms. Yin, where the students read from a list of books that are banned by the government and carry stiff penalties. Wei is sometimes a messenger between Ms. Yin and Mr. Chang, school counselor and supplier of the books.

After Ray tells Instructor Bai about the book club, the students and teachers involved are all arrested. Ms. Yin and Mr. Chang are sentenced to death, although Ms. Yin manages to escape the country before she is apprehended. Wei and another student attempt to burn the books to destroy the evidence, but the court allegedly already had enough evidence. Wei is sentenced to 15 years in prison, but is granted amnesty after serving an unknown amount of his sentence, presumably most of it. It is assumed that the other students involved received similar punishments.

Most of Wei's presence in the game aside from flashbacks and the true ending epilogue can reasonably be assumed to be a figment of Ray's imagination. Him being trapped in the school during the typhoon in the prologue is symbolic of his imprisonment, and Ray cutting open his neck in Chapter 1 symbolizes her view that she basically killed him by ratting him out.